Thank you, Roy and Scott!

We are grateful to Roy Richards for his years of service as our founding board chair at OHM–and excited to welcome our new chair, Scott Coleman, this December.

Learn more: read more about our conversation with Roy and Scott in our FY22 Annual Report. 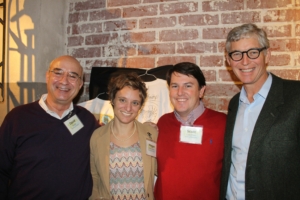 OHM: Roy, thinking back to OHM’s earliest days and the inception of a new conservation organization for Georgia’s coast, why did you see the need and urgency for such a group? What were your hopes for OHM as a fledgling organization?

RR: Ginna and I were both concerned by how vulnerable the Georgia coast was to exploitation and the corrosive effects of a development-driven economy. We could see all over the country that — without a champions to protect them — even the most sacred places in America cannot withstand that. As the singer says, “we pave paradise and we put up a parking lot…”. Indeed, it was already happening, and the beach-fronts and vistas we enjoyed as children were becoming cluttered with luxury homes and strip malls. We also had had the benefit of seeing in a bare handful of American communities that science driven protection policies, backed up by grassroots citizen engagement, can shift ecological outcomes for the better. So we saw the problem, and we saw that there were a few communities that had answers for it. So we simply wanted to do that here.

And I don’t think we were under any illusions about how hard this would be or how long it would take. I remember going into it thinking: ‘If we can just get one or two wins every one or two years, we can call it a success’. One Hundred Miles has surpassed that, for sure, and is accelerating in its impact.

OHM: Scott, what spurred you to join OHM as one of our founding board members?

SC: The need for an organization like OHM was very clear to me from the first time I heard about the concept. Having worked in the coastal conservation community for a number of years, I could see the need for an organization that was coast-wide, but only focused on the coast. One that could advocate for good environmental policies and shine light on bad ideas and educate and engage the public about the importance of our coast’s natural resources. I got involved early on with the search committee for an executive director, and as a committee, we hired Megan. I joined the board soon after that.

OHM: Roy, how has our work, or our conservation movement in general, most surprised you? And/or excited/challenged/pick your own adjective?

RR: I was doubtful in the early days about the necessity of broad, community engagement in this work. I simply thought that we could be successful with a handful of science majors and a lawyer or two on the board. But Megan convinced me otherwise, and then showed us all of the value of Science plus Law plus Citizen Support. It takes all three, but I didnt see that in the beginning.

OHM: For both of you, thinking back over the past 10 years, where has OHM been especially successful ? Do you have a favorite moment or highlight from our first decade?

RR: Well, a couple of things. The Spaceport saga has been a mighty example of voters declaring ‘Enough!’, and demanding accountability from local officials. And the US Army Corps of Engineers’ adjustments to Savannah River dredging plans to protect Sea Turtles is another big win. And then, look at all the oil rigs working up and down our coast….There are none(!), thanks to the concerted efforts of a dozen or more environmental organizations led by OHM to block oil development here. Having said all that, it’s a bad idea (and probably bad luck) to declare victory in this line of work. Ours is mostly a business of protecting what we have, and building wide-spread, community-based pride in local ecology and culture. Our work is never done.

SC: When the protection of the salt marsh buffer was removed, OHM quickly proved the important role that they would play in protecting our Coast.  OHM helped to organize partner organizations, and helped to educate and organize the public, from the grass tops to the grass roots, to petition the General Assembly to include the protective buffer in Georgia’s Coastal Marshland Protection Act.  The amount of public input by Georgians that care about coastal Georgia had not been seen since the passing of Georgia’s landmark conservation legislation, the Coastal Marshland Protection Act in 1970, and it was successful!

OHM: Scott, as you take on the role of board chair, what are you most excited about?

SC: I’m excited to be involved with an organization that has built such a positive reputation and track record while helping to provide a voice for our Coast’s wildlife, special places, and communities. I’m also excited to continue working alongside such a talented, capable group of staff that are leaders in the field of coastal conservation.

OHM: And in another decade, what do you both hope OHM will have achieved? What can our donors and advocates do to help us get there?

RR: But for OHM and our conservation colleagues, this beautiful coastline remains terribly vulnerable. And every year the state legislature considers laws and policies that benefit a scarce few people or companies at the expense of the coast we love. Our next few years at OHM will be about strengthening our position and enhancing our protection skills.

Our future success will require deeper community engagement across our span from Savannah to St Marys, and more collaboration with our fellow conservationists. We know how to do this and we have the leadership to do it, but it will require enormous work and resources to both do the job and build out our staff at the same time. Success for us means that every day a thousand people wake up on the Georgia coast thinking about how much they love this place…and what they should be doing to protect it. That kind of pride is what we are growing, and now we’ve got ten years of progress to build upon.

SC: And in the next decade, we have an opportunity to help Georgians across the state to realize that our remarkable coast belongs to all of us—and that the protecting the health of our coast’s natural resources and communities is the responsibility of all of us.