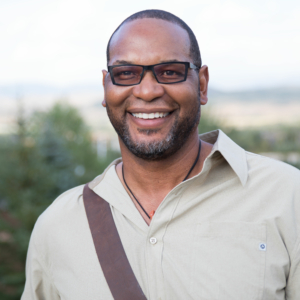 J. Drew Lanham, PhD,  (Clemson B.A. ’88; MS ’90; PhD ’97) is an author, poet, public speaker and scientist, from Edgefield and Aiken, South Carolina. He is an Alumni Distinguished Professor and Master Teacher of Wildlife Ecology at Clemson University,  whose work addresses the confluence of race, place and nature. A conservation and cultural ornithologist,  he has mentored nearly fifty graduate students, published extensively in the scientific literature and taught courses in conservation biology, forest ecology, wildlife policy, ornithology and environmental literature/nature writing.

Drew is the Poet Laureate of Edgefield County, SC and the  author of  Sparrow Envy – Poems (Holocene 2016, Hub City 2018), Sparrow Envy – A Field Guide to Birds and Lesser Beasts (Hub City 2021) and The Home Place – Memoirs of a Colored Man’s  Love Affair with Nature (Milkweed 2016/Tantor Audio 2018). His memoir is a past winner of the Reed Environmental Writing Award (Southern Environmental Law Center), the Southern Book Prize and a  2017 finalist for the Burroughs Medal. It was named a memoir and scholarly book of the decade (Lithub &  Chronicle of Higher Education,   resp).  He has contributed chapters to a number of anthologies including Carolina Writers at Home, Literary Dogs, Bartram’s Living Legacy, The Colors of Nature, and Outdoor Adventures in the Upcountry.

Dr. Lanham is the winner of the Dan W. Lufkin Conservation Award (National Audubon Society ) , Rosa Parks and Grace Lee Boggs Outstanding Service Award (North American Association for Environmental Education), and the  E.O. Wilson Award for Outstanding Science in Biodiversity Conservation (Center for Biological Diversity).   He is a Fellow of the Clemson Parks Institute and Safina Center and serves as an advisor to Georgia Audubon.    Dr. Lanham is a public speaker,  and past board member of the National Audubon Society, Audubon South Carolina, South Carolina Wildlife Federation, Aldo Leopold Foundation, Bird Note and The  American Birding Association.

Drew is an eco-social advocate/activist and progressive rural southerner intent on making a difference for his homeplace by bending hearts and minds towards a more progressive  region, where lost cause will be remanded to memory and museums as nature stewardship expands through prisms of multiple ethnic hues. He’ll accomplish this mission  by practicing robust science, while writing and speaking artfully towards recognition, reckoning and reconciliation of  all the region has wrought and brought to the lives of its people –bitter and sweet.   Drew is at heart “…a man in love with nature.”; a lifelong  bird watcher and an avid hunter – gatherer -conservationist. He lives currently in Seneca, SC with his wife Janice. They are the parents of two adult children, Alexis Shepard (Aaron Shepard) and Colby.